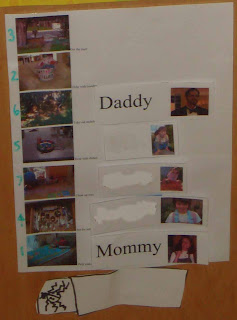 In an earlier post I shared a "chore" system that didn't work so well for our family. I still felt it was a program that might work for another family, so I wanted to share the idea, but we continued to flounder for some time in our attempts to keep our oldest daughter, in particular, involved in keeping our household running smoothly. For me this is an important facet of family life for many reasons.

1) I need help! As the one who usually does what little housework gets done around here I appreciate all the help I can get, even if it is from a two year old.

2) Housework teaches useful skills. I didn't appreciate how important daily household tasks were until I was well on my way to adulthood. As a result I've rarely felt like I have a very good grip on managing our home. I would like to change that pattern with my kids. I want them to know what is involved in maintaining a clean and organized house, or at least see the importance of it in my flailing attempts.

3) Self-regulation is key. We have seen how many times, when she wants to "do a job" it is very regulating for our daughter. In many enivironments, school, Daisy troop, at home, and at church, giving her a meaningful task to focus on helps her know her role and maintain excellent behavior. It also gives her a great sense of self-esteem, "Wow, look what I did, Mom!"

That last point actually holds the key to how we developed our new chore system. In our previous attempt, our daughter earned "stars" by completing certain tasks and the stars could be redeemed for larger incentives like time with Daddy or a trip to the yogurt stand. She was the focus, the rewards were external, and she had the same tasks every day. The problem was, even with a variety of external rewards she got "bored" with the tasks, and eventually began to resist doing them. No amount of stars was worth the effort to her. However, we kept hearing about how she was going to be "line leader" or "caboose" or "weather" at school the next day and I realized that she was never bored with her jobs at school. I approached her teacher (wonderful person!) and asked to see her system for classroom jobs. She has a pocket chart with about a dozen jobs and the children simply rotate through who does each job. There are more children than there are jobs, so often the children have a day off. The key seemed to be that the job rotated frequently so that the children are not bored with the tasks. Everyone participates. The rewards are natural (praise from the teacher for a job well done) and internal ("Look what I did!"). I set about copying the system for use at home (see above), and so far I am pleased with the results.

Our family jobs are: bringing in the mail, helping with laundry, taking out the mulch, helping with dishes, picking up toys, setting the table and making beds. Everyone has one job each day until the reach the bottom of the chart where they get a day off. I can tell you that my daughter likes the new system because she has added to it in a very positive way by creating the job "bug helper" at the bottom of the chart. During the Spring and Summer she enjoys catching bugs and keeping them indoors in various bug houses. The bug helper gets to give food and water to the current bug menagerie and/or release them outdoors if they've been kept indoors as long as we are comfortable with. When she adopts a system she loves to put her own special twist on it, and this is it.

Pitfalls so far:
Must close because this post is participating in the Mom's 30-Minute Blog Challenge and time's up!
Posted by KDL at 9:56 PM

I really like the pictures of each chore! So often those "cartoon" chore charts just don't translate to my kids, but pictures of our actual house - that's a great idea!