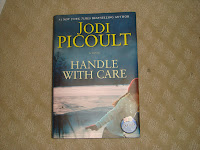 As an incentive to myself for hanging in there with developing this blog, I promised myself that I would buy the novel, "Handle With Care" by Jodi Picoult. I can't remember where I first saw it advertised, but I was hooked by the synopsis. "What if their child had been born healthy?" I had not read a Jodi Picoult novel before, but it was clear the story was relevant to this blog, so I was very interested to see what it was all about.
The story did not disappoint. True to my usual novel reading habits it became difficult to get my regular chores done because I really just wanted to read "one more chapter." I admire Ms. Picoult's ability to tell the story through the voices of the several very different characters and through different time frames. I have read other authors that do this poorly and it is confusing and detracts greatly from the reading. Ms. Picoult does it quite well, and I think it made the story more interesting to read. The story revolves around a blended family: mother, daughter from previous relationship, father, and daughter, Willow. Willow is born with Osteogenesis Imperfecta (Type III). I had not heard of this condition before so I was intrigued just from the standpoint of wanting to learn more about it. OI affects the way bones develop such that they are very brittle and break very easily. Willow's parents find out that they could have learned much earlier in their pregnancy that Willow had OI and that they can pursue a legal case against their obstetrician for "wrongful birth". The parents both love Willow deeply, but the mother, Charlotte, feels the wrongful birth suit may be their only chance to afford all of the treatment and therapy that Willow will need. The father, Sean, feels that the implication that Willow should not have been born is too emotionally damaging. The story is intriguing in that it explores so many facets of the spiritual, ethical, relational and financial issues surrounding special needs parenting.
There were two things that I did not enjoy about the book, and I suppose both are personal preference. First there is a fair amount of profanity. It is not as excessive as in some other books, and perhaps it is "realistic" in the sad sense that people do speak to each other in those terms these days, but I don't need to read it in an otherwise perfectly good story. Second, I did not like the ending. I hope without giving away too much for those who might be interested in reading this for themselves, there are three things I did not like about it. First, I prefer endings that either resolve the various issues and let the characters resume a peaceful slumber between the covers until the next time I decide to read them or endings that make me want to know more about what happens to the characters either to invent in my own mind or to read in the sequel. This ending didn't do either of those. It just hangs limply in my mind. Second, I thought it was a little too obvious. There is a lot of foreshadowing through the book that left me thinking, "Oh, I hope she's not going to..." and then...alas. Lastly, it seemed most unlikely given the characters as I had come to know them through the story, particularly Willow and Charlotte.
This leaves me curious...which side of the story do you think you would support - Charlotte or Sean? From my previous posts I've probably made my opinion clear, but I'd sure like to hear your thoughts!

Other book reviews:
A Regular Guy