Book Review - Anything but Typical 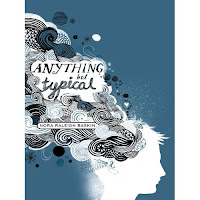 Anything But Typical is a middle-grade fictional novel by Nora Raleigh Baskin. It takes us into the world of a high-functioning autistic boy named Jason. As I first started reading I wondered if the book was biographical, but came to understand that Ms. Baskin just really did her research and, I think, has a good sense of what is going on in the world of a person affected by autism.

Jason has always been empowered by written words. In savant fashion he was able to spell before he was able to speak. He still struggles to express his thoughts and feelings verbally, but using a computer devises richly descriptive parables that communicate his deeper feelings. Jason writes his stories on-line and meets another writer by "chatting" about their respective works. The main dilemma of the plot arrives when Jason has the opportunity to meet his on-line friend in person and fears that his virtual persona can't be lived up to in reality.

Another review I read said that there were many humorous situations in the book. Maybe it is just my perspective as a parent of a special needs child, but I felt less humor and more anxious confusion in many of the situations as Ms. Baskin draws us into awkward moments where Jason knows what he should do, or what others want him to do but struggles to find the right path to get there. I don't want to give the impression that there is no humor, but for me the most humorous things were when the people surrounding Jason tried to help him but were misunderstanding his feelings and his intent. His parents set up a mock airplane seat when they misread his anxiety over meeting his friend as fear of traveling in a plane. They have him sit in the mock airplane for increasing lengths of time but have no idea that his fear is probably much more common-place: the fear of rejection.

I think this is an excellent read for anyone who wants to understand what the inner world of at least some autistic individuals may be like, and how similar their needs are to everyone, really.
Posted by KDL at 9:13 PM