Angels Part 2 Strangers Among Us 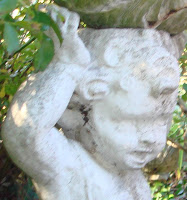 This is the second of eight posts based on the Bible Study Guide "Angels" by Douglas Connelly, A LifeGuide Bible Study. Today's passage is Genesis 18-19, which describes encounters that Abraham and his nephew, Lot have with "men" who are later revealed to be the LORD and two angels incarnate. Abraham is resting in the shade of his tent during the heat of the day when three strangers approach his tent. According to the custom of the day he prepares a hasty meal for them, offers them water to wash their feet, and a place to rest before they continue their journey. While the strangers are eating they ask him about his wife, Sarah and then predict that she will give birth to a son within a year. Sarah overhears the conversation from where she is working in the tent and she laughs "to herself" at the idea that she will bear a child in her old age. The men ask why she laughed and assert that nothing is too difficult for the LORD. After this initial indication that these men are not typical travellers, Abraham walks with them as they begin their journey. One (now called the LORD) lingers behind to talk to Abraham and the others continue on to Sodom, where Lot lives. The LORD tells Abraham that He is planning to destroy Sodom and Gomorrah because He has heard a great outcry against them. Abraham "argues" with God about sparing the cities for the sake of the righteous who live there, thinking specifically of Lot. Meanwhile, Lot meets the other two travellers (now called angels) at the city gate of Sodom in the early evening. Lot offers them a place to stay. While they are eating Lot's house is surrounded by the men of Sodom who want to have sexual relations with the strangers. Lot goes out to reason with his neighbors, but when the crowd becomes violent the angels pull him to safety inside the house and strike all the men of Sodom with blindness. The angels then warn him that God is about to destroy Sodom and Gomorrah and that he should gather all of his family and flee. Lot's sons-in-law don't heed the warning, but Lot, his daughters and his wife all leave Sodom. The angels warn them not to stop and not to look back, but Lot's wife looks back and is turned "into a pillar of salt."

One key thing to recognize in this passage is that these angels appeared, at least at first, to be just like any other person. Abraham offers them food, rest, and water. Lot also extends hospitality. The men of Sodom offer carnal pleasure. No physical features indicate the exceptional nature of these visitors. Still it is clear they have special knowledge - they know specific, personal events to come for Sarah and Abraham; and they know the larger picture of God's plan for Sodom and Gomorrah. They also have special powers - they struck the men of Sodom with blindness so as to create a diversion and buy time to allow Lot and his family to escape. They are messengers both of mercy - to Abraham and Lot, and of judgement - to Sodom, Gomorrah, and Lot's wife.

Also note that Abraham and Lot welcomed these strangers before being blessed with personal promises and warnings to flee to safety. Though not necessarily on the look out for such an encounter, Abraham and Lot both practiced hospitality and welcomed the presence of the angels in their lives.

Have you ever experienced angels in your life? Do you welcome their appearance? In Hebrews 13:2 we are urged to "entertain strangers" in case the strangers turn out to be angels on a mission of mercy. Are you ready?
Posted by KDL at 11:37 PM