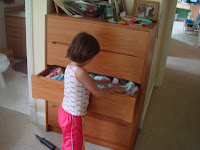 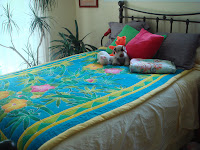 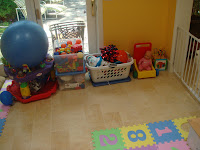 I've waffled a bit about whether or not to post this tip...we tried it for a while and really liked the results, then it sort of fizzled. Sort of like one of those really fancy fireworks that really make you ooh and ah and then they're over before you can catch your breath. Still I decided it might work better for others and should pass along some of the unique pieces that (briefly) made it work really well for us.
Sometime over the Summer my daughter decided that she wanted to be in charge of putting away her own clean laundry. Needless to say I was thrilled...this was the first sign of her being ready to take on any "chores" or as I like to call them family contributions. Then she got intrigued with my trips to the compost pile and started volunteering eagerly to take out the vegetable peels, etc. We were so happy with these developments and praised her profusely each time she did a little job. I even bragged about her to another grown up which always makes her day.
Somehow (who knows how except that maybe she got bored with the deal) it gradually became harder and harder to convince her to keep doing these things. Soon she was resisting these tasks which previously she had been so excited to do. Following some discussions with school staff about trying a positive behavioral support (star chart) system with her at school, we decided to try out something like this at home. I made a chart with pictures of each of the tasks she had previously enjoyed doing: putting away clothes, cleaning up toys (actually this was a mommy dream task) , making her bed, taking out compost, clearing her dishes after meals. I explained to her that each time she completed one of these tasks we would put a star on her chart and then after she had earned so many stars she could choose a reward. We developed a reward system that we were willing to live with where she could either turn in a small number of stars for a small reward or save up stars for larger rewards. I fully expected her to turn in her first four stars for four M&M's (her favorite treat) but she surprised me. She saved up 16 stars for a trip to the neighborhood school yard with Mommy. Later she saved up even more stars for a balloon from the grocery store and later a trip to a frozen yogurt place. We were excited to see her ability to delay gratification, and we were also happy to have a relatively neutral way to encourage her to do her "jobs". When she said she didn't want to do something we'd say, "Oh, you don't want a star?" Generally she would change her tune and either do her job right away or ask to do it when she finished what she was already doing.
So why my ambivalence about this seemingly successful program? It seems to have stopped working. After her third reward and a smattering of stars earned toward a fourth she just doesn't care anymore. What happened? I have a couple of theories. First, the staff at school implemented her star charts there. I think the effect was somewhat diluted. Stars, stars, everywhere, so who cares? Frankly I'd rather have it keep working as well as it does at school, so I haven't pushed the issue at home. Second, it takes a lot of effort (at least with this child) to keep the program going. For the most part I was the one reminding her that she had earned a star and putting it on her chart and asking her if she wanted this reward or to keep saving stars. Somewhere in there Halloween and a few other chaotic events happened and I couldn't quite maintain the level of focus needed to keep it going. I do hope I'll remember to try this again if it seems like we need the extra motivation factor. Maybe it would be good for Summer months when school is not dividing the spoils and I (supposedly) have less on my to do list.
The key factors to success seemed to be:

I should also note that all is not lost. In general her resistance to doing the tasks now seems diminished, and though she still sometimes says no and offering her a star does not change the answer, it is easier for me to shrug and say, "Oh, well!" and perhaps that in itself is a good outcome.
I would love to hear your thoughts on such programs...have they worked for you? If so, what are the keys to success? If not, why not? What are the pitfalls? Feel free to leave a comment!
Posted by KDL at 10:55 PM

We tried behavior mod techniques with our kids and I used them as a teacher. As with your daughter, they helped but weren't magic. Some kids need immediate gratification, others mess up in order to get attention, some become bored with the rewards, etc. Praising someone else's good behavior while ignoring a misbehaving child also helps sometimes, but the misbehavior can become worse. Every kid is different.