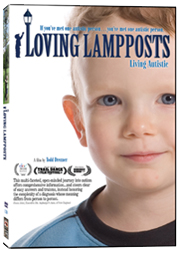 First, my apologies for disappearing for a week. Last week was supposed to be my "light" blogging schedule, but not quite THAT light. We had an urgent accounting project dropped on us, which basically left me thankful that our family has our own issues and not another person's. Maybe God really does give us just what we can handle.

Meanwhile, I'm resurfacing just in time to hit the review post with a documentary called Loving Lampposts - Living Autistic by Todd Drezner. The title refers to Drezner's son's obsession with lampposts. There is a park near their home with old-fashioned looking lampposts and the little boy has named four of  them and likes to visit them often to give them hugs and whisper sweet endearments. This is a charming characteristic most likely springing from his autism spectrum disorder. His father set about making this film in an effort to cut through many of the controversies surrounding autism, revealing the double meaning of the title. You can imagine the unfolding story as one family's journey, lit by each discovery as they seek to understand and love their son. The film ends up being a thumbnail sketch of the history of this challenging disorder, interspersed with some of the key players and their influence on society's awareness and understanding of autism.

Thirty years ago only 1 in 2,500 children was diagnosed as autistic, today as many as 1 in 110 bear that diagnosis, worldwide. Is this an epidemic? Drezner interviews parents of adult individuals with autism who grew up in the 1950s, back in the day when children with autism were usually diagnosed with schizophrenia. He talks to adults with autism who grew up in the era when autism was equated with being non-verbal, so verbal children with other symptoms of autism were labeled psychotic or neurotic. He talks to medical doctors who take the view that autism is a medical condition related to environmental toxins, and to parents who have used non-traditional biomedical treatments (like chelation, hyperbaric oxygen, and pro-biotics) to "recover" their children. The vaccine debate is aired. The secretin scandal exposed. The question of "functional grades" is considered. I think the only controversy not discussed is whether a person "is autistic" or "has autism."

Though respectful and even handed, the film makes it clear that Drezner does not fall into the camp of people who consider autism to be a disease. Obviously there is some biophysical/biochemical/neurological difference in the brain affected by autism, but Drezner argues that it should not be placed in the same category as cancer, for example, or diabetes, where a physical problem must be made right in order for a person to live and thrive. He comes down squarely against the notion that vaccines have any causal relationship to autism. He is empathetic toward parents who seek out alternative therapies as a means of "doing something" for their children, but in the end his own view that autism is a disorder that must be accepted and understood as a "different way of viewing the world" rings out.

I have previously published my own research into the "recovery movement" and still want to be clear that our personal story does not line up with the medical issues that some other parents of children with autism face. Our daughter has never experienced seizures or severe gastro-intestinal distress (unless she has the flu). She has no known food sensitivities and seems to have been on a slower developmental trajectory since birth or at least very early newborn days. Still it is hard to discount another parent's story, and I still wonder if we all aren't describing two (or even more) disorders with similar symptoms but different underlying causes. The old analogy of blind men describing various pieces of an elephant to each other and arguing about what an elephant is like comes to mind. In this case perhaps each blind man thinks they're describing the same animal, but perhaps instead one is feeling a kangaroo while another is feeling a wallaby. Some pieces are the same, but in the end they are a different beast.

My favorite portions of Loving Lampposts are when we see and hear from various adults with autism. There is an older man who makes beautiful pottery to support himself in an apartment where various individuals assist him in daily tasks and routines. One woman particularly affected me because she prefers to speak through her computer, though at one point in the film she does speak with difficulty. Her computer lets her intellect shine through as she composes quite cogent responses to fairly philosophical questions. Perhaps my favorite is the woman who decided to keep a pet refrigerator. I feel I have a lot to learn from these adults who are able to express what they have learned about themselves and about autism along the way. I know it helps me understand better how my daughter sees the world around her.

This is a compelling film. I did not expect my husband to view it with me, but after standing through several promos of other films marketed by the same studio he eventually sat and watched the entire film. It opened some lines of discussion for us that we had never voiced before. I would recommend that anyone who wants to understand more of the history and controversy swirling around this increasingly common disorder should watch this movie, and soon. Loving Lampposts has been making the circuits of independent film festivals and will be released on DVD on March 29, 2011, just in time for National Autism Awareness Month (April).


Disclaimer: Cinema Libre Studio sent me a promotional copy of Loving Lampposts for review. I received no other compensation, except opened eyes and a warmed heart.
Posted by KDL at 1:46 PM

Fabulous review. I, too, was touched by this film.

Excellent review, you make me very much want to watch this for myself now. It sounds very even-handed and thoughtful (and your review shows you to be the same).