Have you met Ralph? We were introduced to Ralph when our daughter was about 6 months old. Some friends who live in the Midwest sent his CD to us. I remember putting it in the CD player in our temporary living room (we were remodeling at the time) and watching her bob along with the music. She had just learned to sit up, and I had no idea of the journey that was in front of us.

We listened to Ralph a lot while she was playing and I was doing whatever it was I used to do...She loved his music so much that I would often sing his songs to her while I was pushing her in her baby swing in the back yard. As her language delay became more evident we listened to even more music. Ralph was always a part of the mix. We had collected four CDs and a DVD by this point. She liked all of them, and it was definitely something that got her talking, "Sing Freddy Bear...sing!" Freddy Bear is the first song on Ralph's World, and it was love at first listen. All of the music is kid friendly without being hard for adults to listen to, if you know what I mean. Ralph does a good mix of original songs and childhood classics like the ABC song (then backwards) and Do You Know the Muffin Man. I still enjoy listening to all of the music and I have heard them many, many times. Really, it's good stuff. If you like the Beatles you'll like Ralph. 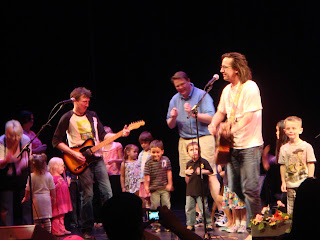 I recall telling my daughter during her potty training (which was lengthy) that I would take her to a Ralph concert when she learned to use the potty. Well, Ralph doesn't make it to the West Coast very often. There were a couple of shows that we couldn't make it to, then after the twins arrived, followed shortly by our daughter's diagnosis the Ralph concert kind of fell by the wayside. Last January I got wind of another Ralph show happening in March just a few miles away. I got tickets for my daughter's birthday present and we went for a mommy and me date. She was so happy to get to meet Ralph in person, and even stayed after to give him a hug. We now have an autographed copy of Ralph's World. It was a relatively small concert, so Ralph did a lot of interaction with the children. He had them up on stage, down in the "mosh" pit, and running all over the auditorium, actually. I had worried a bit about how long my daughter would be able to sit in her chair and listen. I needn't have worried. I don't think a single kid there sat down the whole time. It was really fun.

One of the things I like most about Ralph, besides his music, is that many of his concerts are benefit events. The show we went to helped support policemen and their families. This weekend, Saturday 9/25, Ralph is back on the West Coast in San Francisco doing a show as part of the Kidaroo music festival. Proceeds from the show will benefit Yick Wo Elementary school. Back in the Midwest on Friday 10/22 Ralph will do a solo acoustic program to benefit the Jasper Against Batten Foundation, which fights a rare childhood disease. You can see a full list of his shows here (click on Tour Dates). He also does some "adult music" in his alter ego, Ralph Covert and the Bad Examples. So anyway, if you haven't met Ralph yet, you should soon. He's one of our heroes.
Posted by KDL at 12:47 AM